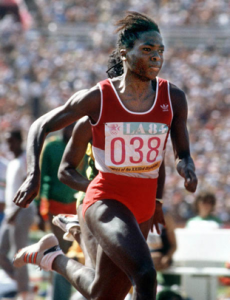 Angela Bailey was selected in 1980 to attend her first Olympic Games, but was unable to attend due to the boycott of the games. At the 1984 Olympic Games in Los Angeles, Angela, along with fellow inductee, Marita Payne-Wiggins, won a silver medal in the women’s 4x100m relay. She also attended the Olympic Games in 1988. In addition to her Olympic medal, she has three silver medals from the 1978, 1982 and 1986 Commonwealth Games in the 4×100 metre relay. In 1987, at the World Indoor Championships, she was able to capture a Bronze in the 60 metre, and later that year, Angela set the Canadian record in the 100m with a time of 10.98 seconds. That record still holds today. Additionally, she holds the Canadian indoor record for the women’s 200m.